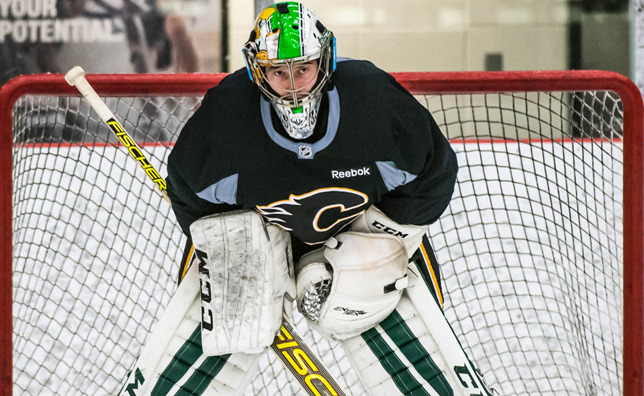 BATTLE IN THE BLUE PAINT

This is the first year in recent memory where the Flames have not needed to extend camp invites to free agent goaltenders; with five prospects in the mix, they had their bases covered in net last week. Each one of the goaltenders impressed throughout the course of the week and are likely using camp as a springboard for their training regimen for the next couple of months.

Jon Gillies, who was limited to seven games last season after opting to undergo hip surgery, looked like he hadn’t missed a beat. While he did not play in Thursday’s scrimmage (the other four goaltenders split the pair of 30-minute periods), he had full range of mobility in practices, had sharp reflexes, and excellent rebound control.

Mason McDonald, fresh off his fourth season in the Quebec Major Junior League, had clearly made strides over the last year and is hoping to turn pro this fall. He turned heads in the scrimmage, stopping 14 of the 15 shots he faced in 30 minutes of action at WinSport.

David Rittich, signed this spring out of the Czech Republic, showcased why the organization wanted to get him in the fold. The 6-foot-4, 202-pound goalie was quick on his feet and very athletic in his net.

Tyler Parsons, part of this year’s draft class, was every bit as advertised when the Flames nabbed him 54th overall in last month’s NHL Draft. Athletic, aggressive, and positionally sound, he didn’t look fazed by his first NHL camp experience.

And Nick Schneider, who impressed enough last year as a free agent invite to earn himself a contract, looked as poised as ever in the blue paint. His year-end stint with the Stockton Heat, where he appeared in nine games, seems to have bolstered his confidence.

It’s only July and you can’t put all your eggs in one basket after three days of on-ice sessions in the middle of summer but the Flames management has to be pleased with what all five masked men brought to the table last week. 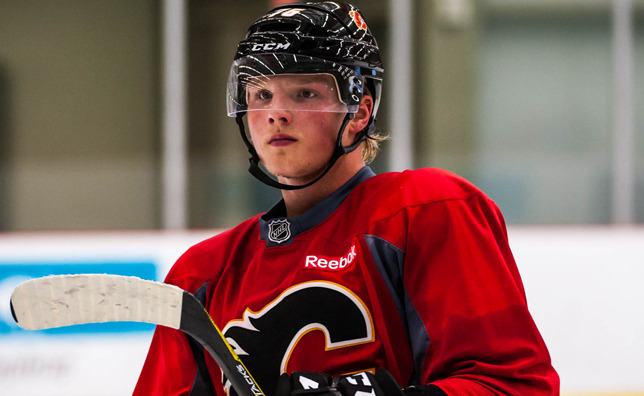 Just a guess but when Eetu Tuulola’s name was called in the sixth round of this year’s draft, not many Flames fans knew who the winger was.

He has spent his career in his home country of Finland, playing primarily for HPK U20 of the Jr. A SM-liiga league, and was ranked 19th among international skaters by NHL Central Scouting.

But people know who he is now.

Seemingly always sporting a smile, the affable forward netted a hat trick in Thursday’s scrimmage and was always visible — in a good manner — during drills at practices.

Now, with his first NHL camp under his belt, he has a decision to make. He can return to Finland for the 2016-17 campaign or head over to North America. His WHL rights are held by the Everett Silvertips, who selected him 40th overall in this year’s CHL Import Draft.

“I think his game is more suited for the North American game,” Flames general manager Brad Treliving said. “Talking with him, that’s really what he’s looking at. He likes the small rink and banging into each other. He thinks that’s kind of cool. I think it’s going to suit him well if that’s indeed which way he goes.”

There were a handful of players at camp preparing for their first full professional season or trying to make a good first impression with management in hopes of making the jump out of junior next fall.

Mark Jankowski, Keegan Kanzig, Andrew Mangiapane, Rasmus Andersson, Mason McDonald, and Brett Pollock were all impressive at camp and want to show the organization they are ready for new, bigger challenges in their careers.

For Jankowski, Kanzig, and Pollock in particular, they each had a cup of coffee with the Heat in 2015-16 and have a better understanding of what lies ahead.

“Going into Stockton at the end of my college season … I thought I held my own,” Jankowski mused. “I thought I was dominating and playing my game, the way I can. I think coming out of there and in my exit meetings, I know it’s going to have to be a big summer for me — training-wise, on and off the ice, and working on all aspects of my game. But I definitely feel that if I work my butt off, I can make that jump (to the NHL).” 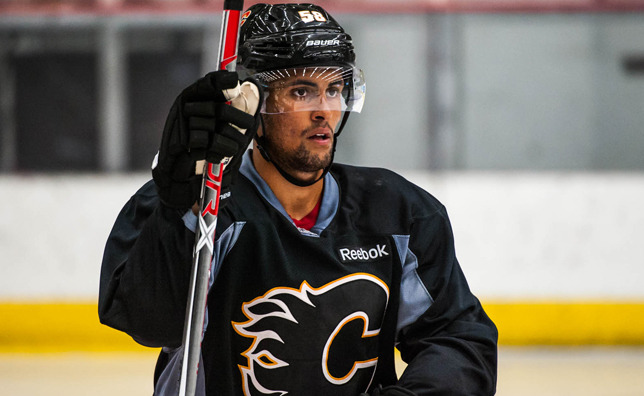 After three days of on-ice sessions, it’s safe to say the Flames have plenty of depth on the back-end.

The twin towers — 6-foot-7 Keegan Kanzig and 6-foot-5 Adam Ollas Mattsson — have put in plenty of work on their skating and it looks like it has paid off, with both being very mobile and quick in drills and in the scrimmage. 18-year-old Riley Bruce, who stands at 6-foot-7, has filled out his frame and also looked much more comfortable on his skates at his second development camp.

Rookie Adam Fox, selected in the third round of the 2016 NHL Draft, also made his presence known. The offensive-minded rearguard showed great vision, leaping up into the play whenever he had the chance and finding his teammates with quick, on-the-mark passes. 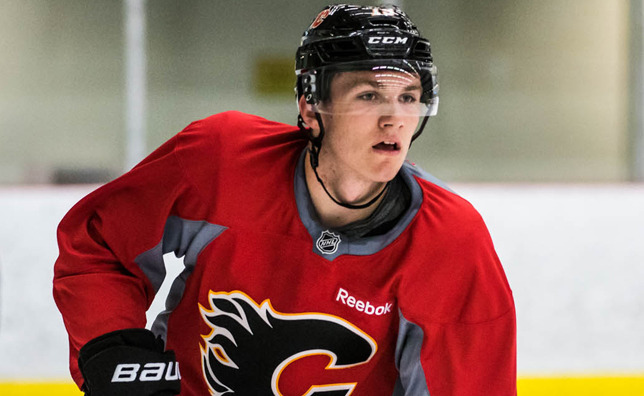 When you’re selected sixth overall in the draft, you know that you’ll be the focal point for at least a portion of development camp. But that spotlight didn’t faze Matthew Tkachuk one bit.

He worked diligently all week, trying to absorb as much information as possible to take into his off-season training program. The 18-year-old will be working with former NHLer Gary Roberts this summer, a move that he hopes will get him physically ready to push for a spot with the Flames this fall.

“I want to show where I’ve come as a player and how much I’m willing to buy into the fact that I want to play soon and just make sure I’m ready,” Tkachuk said after fitness testing last Monday.

“I don’t let pressure affect me and I’ve obviously had pressure my whole life. It’s how you deal with it. I feel like I’ve dealt with the pressure really well and I want to continue to deal with it because it’s not about what everyone else says. It’s about what I do and what my mind is set on and what I want to accomplish.”

“It’s definitely something that I’ve been looking forward to my whole entire life,” he grinned. “Just to sign your first NHL contract, it’s unbelievable. It’s so crazy it’s happening so fast now. It’s a good step, and a step in the right direction. It’s a step forward.”

Jankowski Aiming to Make Wait Worth It
Scroll to top